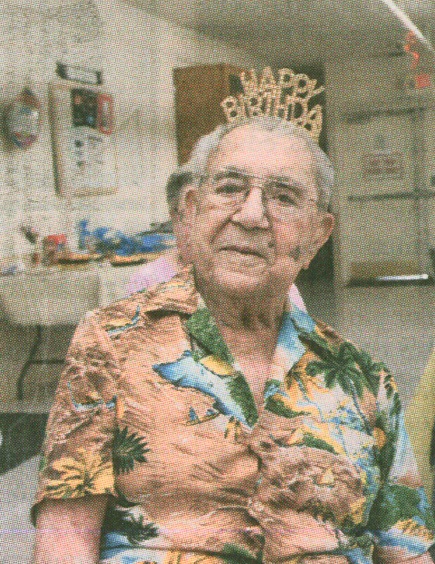 Albert R. Vargas was born May 5, 1915; Woodrow Wilson was President and Wort War I was less than a year old.  Born to John and Rose Vargas and two sons who all preceded him in death.  Albert’s father was an owner of a cargo ship and Albert said he enjoyed accompanying him on his shipping trips because he loved the sea and he had a longtime appreciation for the deep blue.

Albert’s family was hit by the Great Depression in 1929, forcing Albert to mature at an early age.  When not in school he was working on the waterfront to help bring food to the table. He said those few years taught him the most about discipline and perseverance.

When Albert graduated from Alameda High School in 1934, he embarked on a Transpacific Yacht sailboat race from Los Angeles to Hawaii – a 2,225 mile trip with four friends.  One of the boy’s father’s owned a 35 foot sailboat and it took them three weeks to reach Hawaii.  They used radio signals to navigate through the choppy waters.  This was the trip of a lifetime which Albert talked about often.

At the age of 21, Albert completed his Coast Guard license in San Francisco and he became a tugboat skipper, moving Navy ships in and out of the bay area.  Because of his many skills he did maintenance on repairing engines of Navy ships and spend many hours working on submarines and Air Craft Carriers during the war years.

When he met and married the love of his life, Shirley Lorraine in 1936, they spent the next 68 years where they enjoyed many hours on the water and later moved to Arizona to enjoy another activity of square dancing.  They also enjoyed traveling throughout our country and when asked why so much travel, his answer was, traveling is one of life’s greatest teachers and encourages everyone to find the time to travel.

When asked about what makes for a long and healthy marriage, Albert said, “patience is crucial.”  The key is understanding he explained.  “We all have problems; the thing is how you work them out.”

After enjoying two birthday parties for his 104th birthday, Albert was hospitalized and passed away on July 1st.  His last words were, as he looked up at the Priest and received the last sacraments, were: “I have had a blessed and full life and now I am ready to meet my maker.”