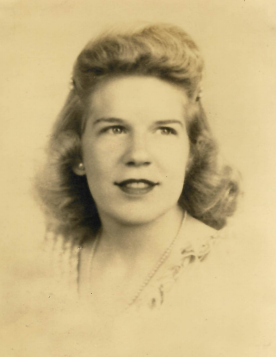 Afton Winona Peterson Reber 93, passed into the tender arms of her Heavenly Father on Friday, December 10, 2021. Winona had been living at the home of her devoted son, Douglas Reber for the past two years. Prior to her passing, she had been surrounded by her children, extended family, and dear friends.

Winona was born in Mesa, AZ on March 27, 1928, the only daughter of Howard Clarence Peterson and Afton Ida Clark Peterson. Her father was Mesa’s first chief of police before his untimely death from pneumonia when Winona was three years old. Her mother was a master educator and teller of stories in the Mesa schools for more than 40 years, and Winona inherited many of her mother’s amazing talents. In 1946, Winona graduated from Mesa High School, where she excelled in both academics and extracurricular activities. She was Mesa High’s first female student body president, a member of the National Honor Society, an officer in Girls League, and in addition to other activities, she lettered in volleyball and softball. After high school graduation, Winona attended Arizona State College (NAU) for one year, then ASU for a year before marrying the love of her life, Leo Melvin Reber. The couple went to live in Gilbert, and together they lovingly adopted three daughters and one son. Then in 1960, Winona conceived and gave birth to their youngest daughter. Winona and Leo loved all of their progeny beyond measure. After the children started to elementary school, Winona went back to the university and completed her teaching certificate. She went on to teach third and fourth grades at Gilbert Elementary until she retired. In her teaching career, she received a number awards for her math instruction and her amazing productions of plays about Arizona history starring her elementary students.

Winona was a devoted, life-long member of the Church of Jesus Christ of Latter Saints. She served in many auxiliary positions in Gilbert Ward and Mesa South Stake, including Relief Society President, ward and stake Young Women’s President, and numerous other positions of service. One of her favorite callings was that of producer for the Church traveling “Road Shows” for which she garnered much recognition. Winona also loved the work she did in the Mesa LDS Temple where she and Leo had been married.

Strict adherence to COVID-19 protocols at both services is requested. The graveside service will be broadcast, and a link will be available through Bunker Funeral Home. Go to www.bunkerfuneral.com for directions to the link. The family wishes to thank Hospice of the Valley for their loving care of mother during her final illness.

We love and miss you, Mom.