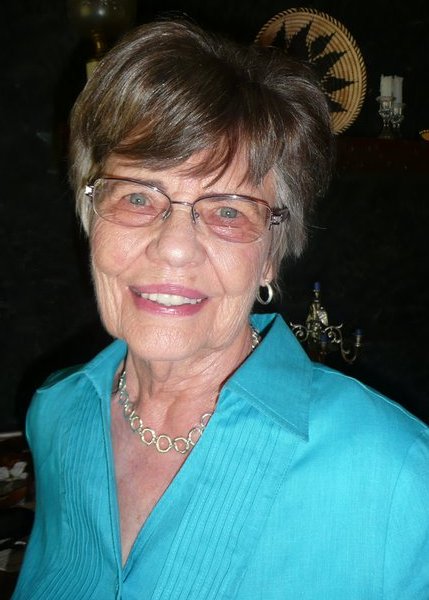 Adelia Esther Shumway passed away peacefully on January 5, 2017 in Mesa, Arizona, just weeks after a happy, family-filled 89th birthday.  She was born December 17, 1927 in Indianapolis, Indiana to Everett Bentley Huggins and Laura Sheppard.

The eldest of three children, Dede learned about hard work and self-reliance while living as share croppers on a farm during The Depression. When she and her brother, Harold, were not helping with the chores or attending school in the one-room schoolhouse, they were exploring the wilderness, dodging snakes and catching fireflies.

When World War II began, the Huggins family had left the farm behind and was living in Gary, Indiana.  There they welcomed a new baby brother, “Billy,” when Dede was 16 years old. Dede attended Portage High School where she lettered in basketball, baseball and track. She also played a role in the school play, reported for the school newspaper, and sang in the choir even though she never considered herself to be much of a singer.

Just after graduating high school, Dede moved with her family to Tucson, Arizona where she would meet her eternal companion, Richard Shumway.  On June 27, 1947, they were married in Winslow, Arizona. After Dick graduated from the University of Arizona, they set off to California to start their life together and raise a family of their own. Eventually settling in San Lorenzo, Dede raised 5 children and made many life-long friends. On June 4, 1955, Dede was baptized a member of the Church of Jesus Christ of Latter-day Saints. She has since always had a strong testimony of the gospel and played many roles in serving others including den mother, young women’s leader, and the bishop’s wife for their ward. In 1990, Dick and Dede served a 2-year mission for the church on the very small island of Niue in the South Pacific.

In their golden years, Dick and Dede retired in Mesa, Arizona near many of their family members. Dede took on the role of grandmother, making each grandchild feel special with family holiday parties and summers spent at the cabin in Pine, Arizona. She honed her photography skills by capturing each memory she created in volumes of books for us to now treasure.

Funeral services will be Saturday, January 14, 2017 at 11 AM, with a visitation at 10 AM, at the Church of Jesus Christ of Latter-day Saints, 532 South Greenfield Road, Mesa, Arizona. Interment will be at the City of Mesa Cemetery.

In lieu of flowers, Dede requested donations be made to Hospice of the Valley.