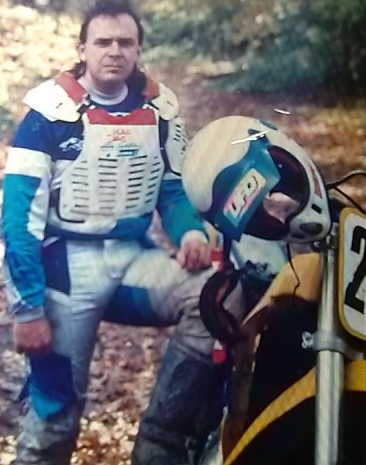 It is with great sadness that the family of Aaron T. Stout announces that Aaron has passed in his sleep on 04-24-21. Aaron had just turned 59 a couple of weeks earlier. Aaron is survived by Paul Stout (son), Marge (Wagner) Stout [mother], Jennifer & Jason Estes [sister], Jeff & Linda Stout [brother]. He was preceded in death by Dale Stout (father), and Claudia (Reichl) Stout [wife].

Aaron was born and raised in the Elburn, IL area, attending Kaneville grade school, and graduated Kaneland High school in 1980. He went on to DeVry College to receive his degree. He was promptly hired by the Charmilles corp. to install and repair their complex tooling machines. Shortly after, Charmilles gave him the opportunities to establish their Phoenix, AZ office. He moved to Meza AZ in the mid 90’s to operate this Phoenix based office out of his home.

Aaron enjoyed many activities, but by far his greatest interest was in motorcycles, a bug started by his father. Aaron loved many forms of motorcycling, trail riding since before he was 10 years old, and went on to race amateur off-road where he did very well, earning many trophies. He also enjoyed street riding for simple pleasure. It was not uncommon to see him polishing the chrome for a couple hours, before heading out on the street with no destination in mind. Upon return, he would return to cleaning the dust off of the chrome. When it turned too cold to ride traditional style, he would often participate in ice racing to scratch that motorcycle itch.

In 2014 Aaron married his one & only love, Claudia, from Denver CO. Despite his need to travel for work, Claudia and he found ways to stay together; often she would accompany him when he needed to travel out of state. In 2018 they adopted Claudia’s nephew Paul who was in need of a complete home. They all resided in their Mesa, AZ home until Claudia’s passing in 2019.

Donations to A.D.D. charities are encouraged in lieu of flowers.